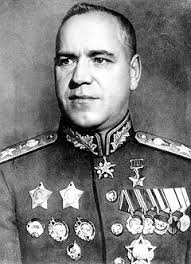 Zhukov was the most acclaimed Soviet military commander of World War Two. His victories over the Germany army in the east, often at great cost in Soviet lives, did much to hasten the end of the war.

Georgi Konstantinovich Zhukov was born on 1 December 1896 into a peasant family in Strelkovka, in the Kaluga region southwest of Moscow. He was conscripted into the Russian Imperial Army in 1915. From 1918 to 1920, he fought for the Red Army in the Russian Civil War.

Zhukov rose through the military ranks, becoming an expert in armoured warfare. In 1938, he was sent to fight the Japanese in Mongolia and in August 1939 inflicted a significant defeat on the Japanese army at the Battle of Khalkin-Gol.

In January 1941, Joseph Stalin appointed Zhukov chief of the army general staff. He was dismissed six months later after a disagreement with Stalin, but was retained in the army headquarters. He was on the sidelines during the rapid German advance into the Soviet Union from June 1941. In October 1941, Zhukov was assigned to direct the defence of Moscow and organised a counter-attack against the Germans.

In August 1942, Stalin appointed Zhukov deputy commander-in-chief of the Red Army, a position he retained until the end of the war. He was sent to the south western front to take charge of the defence of Stalingrad where, together with Aleksandr Vasilevsky, he oversaw the encirclement and surrender of the German Sixth Army.

Zhukov and Vasilevsky coordinated the Soviet armies at the Battle of Kursk, the largest tank battle in history, in July 1943. For the Soviets, the defeat of the Germans at Kursk was the turning point of the war. Zhukov led the final Soviet assault on Germany in 1945, capturing Berlin in April and becoming a world-famous figure. He then commanded the Soviet occupation forces in Germany.

Stalin now regarded Zhukov as a threat and demoted him to command the Odessa military district, far away from Moscow. After Stalin’s death, Zhukov returned to favour, becoming minister of defence in 1955. He then fell out with Nikita Khrushchev, who sacked him in October 1957. Khruschev’s fall in 1964 allowed the restoration of Zhukov’s reputation, although he was not appointed to office again. He died on 18 June 1974.