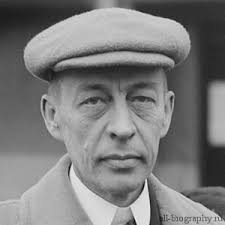 Sergei Rachmaninoffwas a Russian pianist, composer, and conductor of the late-Romantic period

Rachmaninoff was born in 1873 in Novgorod, to an aristocratic family. His father drank and gambled away the family wealth, so the rest of the Rachmaninov clan had to run away when Sergei was young.

He was an enormously talented pianist as a child, and studied music and piano in St Petersburg and Moscow. But because everything came easily to him he got lazy and didn’t bother studying. He ended up failing most of his classes.

While he was a student he wrote the opera Aleka and the infamous Prelude in C Sharp minor, which he would eventually get seriously annoyed by even though it was hugely popular.

When Sergei Rachmaninoff was 24, his First Symphony was premiered. But it was a disaster, and completely unsuccessful. It may have been because Aleaxander Glazunov (the composer), was conducting it.

Glazunov didn’t actually like the piece so probably didn’t try very hard to make it sound good. Oh, and he might have been drunk as well…

Anyway, Rachmaninov fell into a severe depression for three years. He didn’t compose anything during this time. But after a course of pioneering psychological therapy, he recovered and went on to compose even greater works.

He turned out the Piano Concerto no 2, which had a successful premiere. It boosted his Reputation as a composer.

He toured the USA in 1909 with his devilish third piano concerto, which made him super-popular over there. After the catastrophic Russian Revolution in 1917, Rachmaninov fled to America with his family, and began an extremely lucrative career giving concerts and making recordings.

But he was deeply homesick for his native land, which had been lost forever. So he recreated Russia in his house, employing Russian servants and celebrating Russian festivals and traditions.

His fame grew and grew in America, although his composing slowed hugely. It was as if he had lost his inspiration. Instead he spent most of his time conducting and performing.

He died of skin cancer in 1943, in Beverley Hills, California.