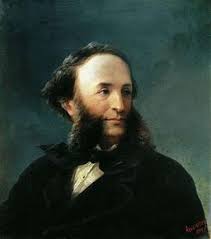 сvan Konstantinovich Aivazovsky (Hovannes Aivasian) was born on July 29, 1817, in Feodosia, Crimea, Russian Empire, into a poor Armenian family. His father was a modest Armenian trader. His mother was a traditional homemaker. His early talent as an artist earned him a scholarship to study at the Simferopol gymnasium. From 1833-1839 Aivasovsky studied at the Academy of Arts in St. Petersburg, where he was a student of professor Mikhail Vorob’ev, and graduated with the Gold Medal.

Aivazovsky was sent to paint in Crimea and in Italy, being sponsored by the Russian Imperial Academy for 6 years from 1838-1844. His numerous paintings of Mediterranean seascapes won him popularity among art collectors, such as the Russian Czars, the Ottoman Sultan, and among the various nobility in many countries. His dramatic depiction of a sea storm with the survivors from a shipwreck, known as ‘The Ninth Wave’ (1850), made him extremely famous. The original canvas is in the State Russian Museum in St. Petersburg. He also made many variations and repetitions of this particular painting, as well, as of his other popular works.

Aivazovsky produced over six thousand paintings of variable quality over the course of his long life. Most of his works were made on a longstanding commission from the Imperial Russian Navy Headquarters, where he worked for the most of his life, from the 1840s until 1900. He earned a considerable fortune, which he spent for charity, and also used for the foundation of the first School of Arts (in 1865) and the Art Gallery (in 1889) in his home town of Feodosia.

Aivazovsky was a member of Academies of Rome, Florence, Stuttgart and Amsterdam. He died on May 5, 1900, in Feodosia.