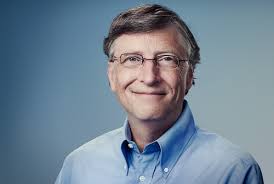 Early Life of Bill Gates
Bill Gates was born on 28th October, 1955 in Seattle, Washington. His father was a successful attorney and mother was a school teacher. He was a middle child with an elder and a younger sister.

His parents wanted him to become a lawyer but Bill was interested in computers from the very beginning. Bill studied at a private school where he became good friends with Paul Allen who had similar interests.

Later Allen became Bill’s business partner when he developed Microsoft. Paul and Bill were computer geniuses and soon realised the potential for a booming computer industry.

While still in high school, Bill, along with Paul, started a firm called Traf-O-Data and earned twenty thousand dollars. Bill Gates was responsible for the first computer virus that ruined other programs and data.

He was severely punished for that and was kept away from computers for a year, to concentrate on law school. But nothing could keep him and Paul away from pursuing their love for computer software.

The Beginning of Microsoft
Gates dropped out of Harvard and wrote programs for the early Apple and Commodore machines. He, along with Paul, started Microsoft in 1975. It was in 1980 that IBM approached Gates and for help with a special project.

Gates then developed the Microsoft Disk operating system or MS-DOS. It was a huge success as software developers moved rapidly to become compatible with the IBM computers. MS-DOS has since then been the leader of all operating systems.

In 1985 they introduced the Microsoft Windows Operating system which was compatible to run on a variety of PCs. It was compared with the operating system of Apple, but Apple OS could run only on Apple machines.

Personal Life
Bill Gates married Melinda French and has 3 children. In the year 2000, they formed a Bill and Melinda Gates Foundation which is one of the largest charitable foundations in the world and aims at enhancing healthcare and reducing poverty in America.

Bill Gates’ house, a mansion in Washington is the most high-tech house in the world and is worth $123 million! The mansion has features like: change the artwork on the wall with a button click, an underwater music system in the swimming pool, 24 bathrooms, a home theatre for 20 guests and many more.