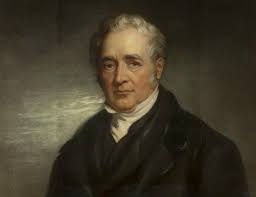 George Stephenson was an engineer. He built steam locomotives for the first railways. Sometimes people call him ‘the Father of the Railway’.

George Stephenson was born on 9 June 1781 near Newcastle-upon-Tyne. His father was an engineman at a coalmine. Stephenson himself worked at the mine and learned to read and write in his spare time. He gained a reputation for managing the primitive steam engines employed in mines, and worked in a number of different coalmines in the northeast of England and in Scotland.

In 1814, Stephenson constructed his first locomotive, ‘Blucher’, for hauling coal at Killingworth Colliery near Newcastle. In 1815, he invented a safety lamp for use in coalmines, nicknamed the ‘Geordie’.

In 1821, Stephenson was appointed engineer for the construction of the Stockton and Darlington railway. It opened in 1825 and was the first public railway. The following year Stephenson was made engineer for the Liverpool to Manchester Railway. In October 1829, the railway’s owners staged a competition at Rainhill to find the best kind of locomotive to pull heavy loads over long distances. Thousands came to watch. Stephenson’s locomotive ‘Rocket’ was the winner, achieving a record speed of 36 miles per hour.

The opening of the Stockton to Darlington railway and the success of ‘Rocket’ stimulated the laying of railway lines and the construction of locomotives all over the country. Stephenson became engineer on a number of these projects and was also consulted on the development of railways in Belgium and Spain.

Stephenson died on 12 August 1848 in Chesterfield in Derbyshire. His only son Robert was also a railway engineer and worked with his father on many of his projects.