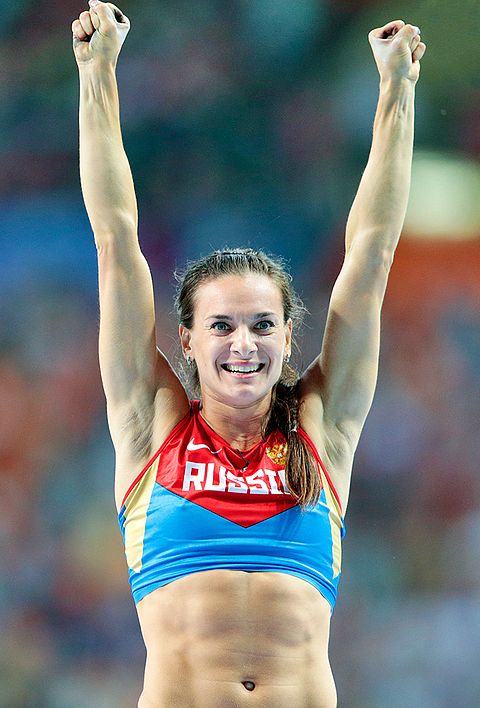 Yelena is an athlete who has set an incredible 27 world records — 15 outdoor and 12 indoor — and won nine straight gold medals in indoor and outdoor championships since breaking through in 2004.

On July 22, 2005, she became the first woman to clear the historic 5-metre barrier in the pole vault.

Initially, Yelena trained as an artistic gymnast in her hometown of Volgograd but she had to leave the sport at the age of 15 because she was considered too tall to be competitive in gymnastics. She went on to reach a height of 1.74m.

She turned to the pole vault and made an immediate impact, winning her first major victory at the age of 16 at the 1998 World Youth Games in Moscow (achieving a height of 4.00m). The following year, Yelena cleared 4.10m at the World Youth Championships in Poland to claim her second gold medal.

She was also successful at the 2000 World Juniors, vaulting 4.20m this time. It was also in this year that the women’s pole vault became an Olympic event at the Sydney Games.

Yelena continued to improve through the early years of the new millennium and gained her first senior medal with silver at the 2002 European Championships for a 4.55m clearance. She took gold with a leap of 4.65m at the 2003 European Under 23 Championships and just a few weeks later set her first world record — 4.82m — at a meeting at Gateshead, England. But she had to be content with bronze at the subsequent world championships in Paris.

By 2004, the women’s pole vault was really beginning to develop as an event and Yelena won her first major title when she triumphed at the world indoor championships in Budapest, setting a new world best mark of 4.86m and went on to win gold at the Athens Olympics with another new world best of 4.91m.