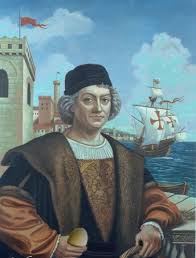 Christopher Columbus was born in Genoa, Italy, in 1451. His career in exploration started when he was very young. As a teenager he traveled the seas and eventually made Portugal his base. Columbus came to believe that the East Indies (present-day Indonesia and surrounding islands) could be reached by sailing west through the Atlantic Ocean. He appealed to the kings of Portugal, France, and England to finance a westward trip to the Indies, but all denied his request. After ten years of monumental efforts but fruitless results, King Ferdinand and Queen Isabella of Spain agreed to finance Columbus in the hopes of acquiring great wealth. On August 3, 1492, Columbus, crew, and three ships, the Nina, Pinta, and Santa Maria, left Palos, Spain, and headed westward.

Land Sighted!
After stopping in the Canary Islands off the coast of Africa, Columbus’s ships hit the open seas. Covering about 150 miles a day, the trip was long and arduous. The crew was afraid of sea monsters and grew more restless every day that land was not sighted. Columbus offered a reward for the first person to sight land. On October 12, a crew member aboard the Pinta sighted one of the Bahama Islands. Columbus set foot on what he believed was one of the Spice Islands, a group of islands in Asia (now known as Indonesia), where valuable spices and riches came from. He named the land San Salvador. Columbus failed to find the riches he expected and continued to search for China. He next visited Cuba and Hispaniola (Dominican Republic). He encountered native peoples who he named “Indians” because he believed they were inhabitants of the Indies.

Legacy
Christopher Columbus is credited with discovering the continent of North America, although he probably wasn’t the first explorer to see the continent, and he believed until his death that the islands he encountered were in the Asian continent. His discoveries were instrumental in the establishment of Spanish colonies in North America.