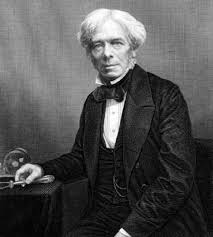 Faraday was a British chemist and physicist who contributed significantly to the study of electromagnetism and electrochemistry.

Michael Faraday was born on 22 September 1791 in south London. His family was not well off and Faraday received only a basic formal education. When he was 14, he was apprenticed to a local bookbinder and during the next seven years, educated himself by reading books on a wide range of scientific subjects.

In 1813 he got a job as a laboratory assistant at the Royal Institution. Then in 1813-1815 Faraday toured France, Switzerland, Italy and Southern Germany with Humphrey Davy. On 12 June 1821 Faraday married Sarah Barnard. The couple did not have children.

The same year, 1821 Faraday discovered electromagnetic rotation. Then in 1831 Michael Faraday discovered electromagnetic induction, the principle behind the electricity generator. Meanwhile in 1825 Faraday was made director of the laboratory at the Royal Institution. Faraday was also an accomplished chemist. In 1825 he isolated benzene. In 1830 Faraday became professor of chemistry at the Royal Military Academy in Woolwich. (He held the post until 1852). In 1836 he became scientific adviser to Trinity House (the body responsible for lighthouses).