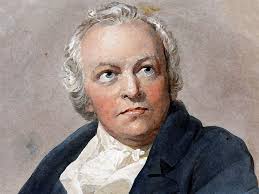 Considered insane and largely disregarded by his peers, the visionary poet and engraver William Blake is now recognised among the greatest contributors to English literature and art.

He was born in Soho, London, where he lived most of his life, and was son to a hosier and his wife, both Dissenters. Blake’s early ambitions lay not with poetry but with painting and at the age of 14, after attending drawing school, he was apprenticed to James Basire, engraver. After his seven-year term was complete, Blake studied at the Royal Academy, but he is known to have questioned the aesthetic doctrines of its president, Sir Joshua Reynolds, and his stay there was brief. It nonetheless afforded him friendships with John Flaxman and Henry Fuseli, academics whose work may have influenced him.

In 1784, he set up a print shop, but within a few years the business floundered and for the rest of his life Blake eked out a living as an engraver and illustrator. His wife, Catharine, whom he married in 1782, remained faithful and diligent and she helped him to print the illuminated poetry for which he is remembered today.

In 1789, he published his Songs of Innocence, the gentlest of his lyrics, but the collection was followed by Songs of Experience, containing a profound expression of adult corruption and repression. His long list of works shows relentless energy and drive. As one of the most complex writers known, it is impossible to summarise his career — he was a combination of extremes. His vision of civilisation as inevitably chaotic and contradictory mirrors the political turmoil of his era. It is only in retrospect that we can begin to appreciate his work and unravel its complex and allusive sources.